What is your Big Idea for Philadelphia?

A City of Innovators 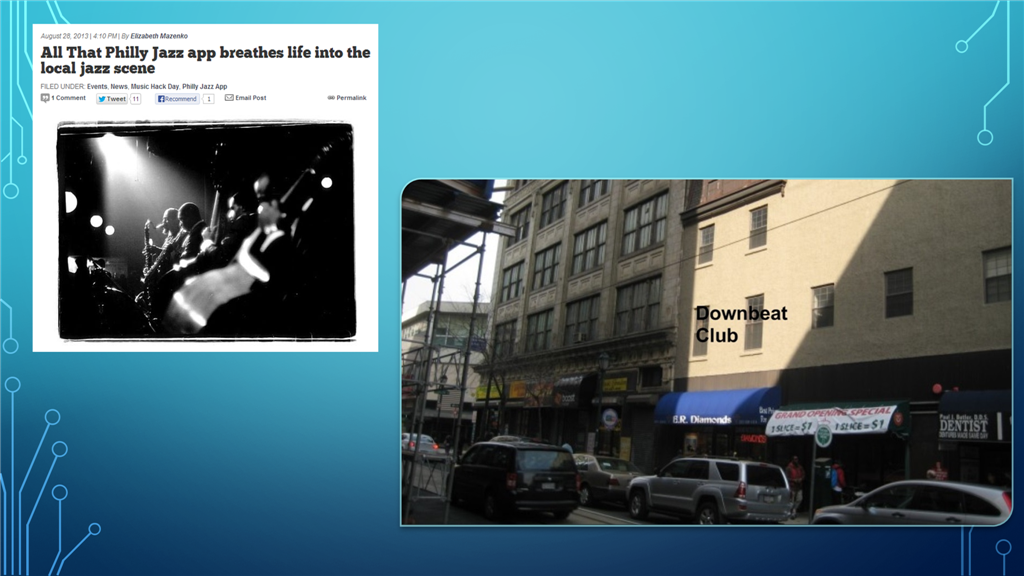 Philadelphia will reclaim its mantle as the “City of Innovators.” A city of firsts, Philly supports a thriving culture of civic hackers who are developing solutions to problems such as food deserts and homelessness.

All That Philly Jazz stems from a music-related hackathon. Through mobile technology, oral history and low-cost public art, we will tell the story ofPhiladelphia’s rich jazz legacy. We will breathe life into hidden places and transform vacant spaces into vibrant places. We will move beyond Ben Franklin’s Philadelphia and introduce new millennial residents and visitors to John Coltrane’s Philadelphia.

The points of interest will be contextualized in real-time. For instance, the legendary Showboat was in the basement of the Douglass Hotel. Philly Joe Jones, the drummer of choice for Coltrane and Miles Davis, was among the first group of African American trolley-car operators. His trolley line went pass the Callowhill Substation and the Downbeat. The tracks are still visible.

But it’s not just about the past. In reimagining vacant lots, All That Philly Jazz will empower community groups to reduce litter and make the city more livable. The project will serve as a national model for cultural preservation and community beautification.

Faye M. Anderson is the founder of Tracking Change, an online platform to promote data-driven models of accountability and transparency. She focuses on the intersection of technology, public policy and civic engagement. A data journalist and civic innovator, Faye has participated in numerous hackathons. She was recognized as a Random Hacks of Kindness “RHoK Star.” Her civic apps include Yo! Philly Votes and the Cost of Freedom Voter ID App. She is currently spearheading All That Philly Jazz, a digital mapping project that is breathing life into Philadelphia’s rich jazz legacy. The project stems from Music Hacks, a music-related hackathon. In 2013, Faye was nominated for Data Journalist of the Year by the Pen and Pencil Club and received the National Coalition on Black Civic Participation’s Social Innovator Award. She was named one of the People of Color Impacting the Social Web 2012 and nominated for the 2011 Women’s Media Center Social Media Award.
Posted by FastForwardPhilly at 7:00 AM

Let us know what you think!